I woke up excited for Nick’s day.  He had been
invited to participate in a fitness morning sponsored by the Professional
Baseball Athletic Trainers Society at Angels Stadium.  This two hour event
included on the field health and fitness activities with trainers
and players from the Angels – a seemingly perfect fit for my baseball loving
fitness fanatic.  As an added bonus, two of Nick’s friends would also
be joining us.  Baseball, buddies and a workout – who could ask for
anything more?
We arrive on time, which is not always the case,
and quickly find our sponsor, the Arc.  Hiccup #1 occurs when we
receive our event T-shirts.  Nick points to the RVCA shirt he is wearing
and says, with emphasis, “This is my favorite shirt.”  I
explain to Nick that I like his shirt too, but that everyone has to wear the
event shirt on the field.  I ask him again to put the shirt on.
He just looks away. At this point, I notice that the T-shirt has some
tags at the neck.  Nick has always had sensitivity to tags.  So I ask
him “If I can cut the tags out, will you wear the T-shirt?”
He nods yes, so I set off to find a pair of scissors – in the stadium
parking lot.  Luckily, the Executive Director of the Arc has a pocket
knife in his car and, between the two of us, we manage to rip/cut the labels
from the shirt.  Walking back to Nick, I proudly hold up the T-shirt so he
can see that the tags are gone, but he is unimpressed and refuses to put on the
shirt.

Acting more relaxed than I feel (“COME ON
NICK, JUST PUT ON THE DARN SHIRT”), I tell Nick that he
can hold the shirt up for parking lot pictures, but that he has to put it on to
get onto the field.  He shrugs at me and holds the shirt up for pictures. 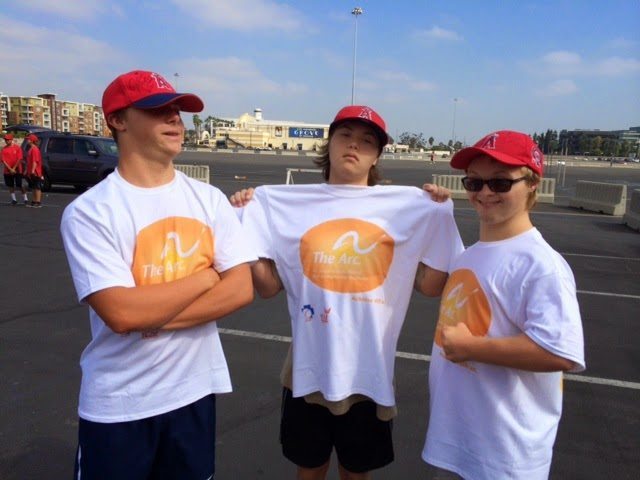 [Notice the sassy teenage look he gives me]
Once inside the stadium, Nick quickly puts on his
T-shirt (?!?) and we find our group.  The morning officially begins
and we hear introductions, explanations and break into smaller groups.
Within minutes, we are on the field.  Our first station is led by Rick
Smith, who has been an athletic trainer for the Angels for over 35 years.
Rick splits our group into two teams and walks the kids through the
circuit they will be following for the first activity.  Hiccup #2, Nick
isn’t on the team with his friends.  He looks at me with a pleading face.
I think about it a moment, then walk over to Rick and ask if Nick can
switch teams.  “Yes, of course” he says.  Now the
teams are uneven, but Nick is happy.  If Nick is happy, I am happy.
As the first participants start to work through the
circuit, Nick is standing apart from his team, so I suggest he get in line for
his turn.  Hiccup #3, he doesn’t want to be in line.  “I want
to work out at home, not here!” he says.
“What?” I
ask. “You get to do squats, jumping jacks, footwork and running –
your favorite – it looks fun.”
“At
home,” Nick says, with a dismissive flick of his hand.
“Okay,
well you can just stand here and watch.” I reply.  And so he
does.
For the next 15 minutes, Nick watches everyone else
in the group do the circuit. Actually, they each run through it three times.
I really wish I could read his mind at these times.  I wish I knew
exactly what to do or what to say to give him the power to let go and have fun,
but I don’t.  If I was guessing, I would say that he doesn’t like
competitive situations against typical peers and that having this activity set
up as a race makes him nervous, but I am not certain.  Even if I am right,
I can’t change the activity just because Nick doesn’t like it.  But I also
know that Nick is often more bold when I am not around and I can fix that.
So, I tell Nick I am off to help some other participants, let my fellow
parents know my plan and leave.  Well, I don’t really leave; I just walk
towards the tunnel that leads to the bullpen and stand behind the padded
wall.  Nick cannot see me.
From my new spot, I watch Nick talk with a parent,
talk with a buddy, and refuse to do the second activity.  Hiccup #4, my
plan isn’t working.  He still isn’t participating.  But I am in the
shade and it is a hot morning, so I stay put.
On his way to his third station, which is in
the bullpen, Nick walks right past me and gives me an odd look.  I say
hello and return to my conversation with another mom.  I check on Nick a
bit later and find him sitting on a bench listening to a trainer talk about the
dangers of performance-enhancing drugs.  I can’t hear all of the details,
but Nick is listening and looking very serious.
After station three, Nick heads back to the field
for the fourth and fifth stations, which seem to involve throwing and catching
practice.  Another parent comes running over to me for Nick’s glove.
Nick has fairly solid ball handling skills, so I am hoping he will
participate, but when I look for him, I see him sitting down on the grass.
Clearly, the morning is not going as planned and I
make a mental note to think twice before signing up for a similar event.
The next time I look around the corner, an Angels player is talking to
Nick.  It looks like he is encouraging him, but I can’t tell.  Nick
goes to the wall to try for a catch.  He catches the first ball, but
misses the second.  He did it!  A few minutes later, I see him
talking to the same player and they start playing catch.  I am pretty far
away, so I can’t see who it is, but when Nick walks back to me, he is holding
an autographed baseball and has a huge smile on his face. I snap a few pictures
of Nick on the field.  He has a happy “too cool for school”
stance. 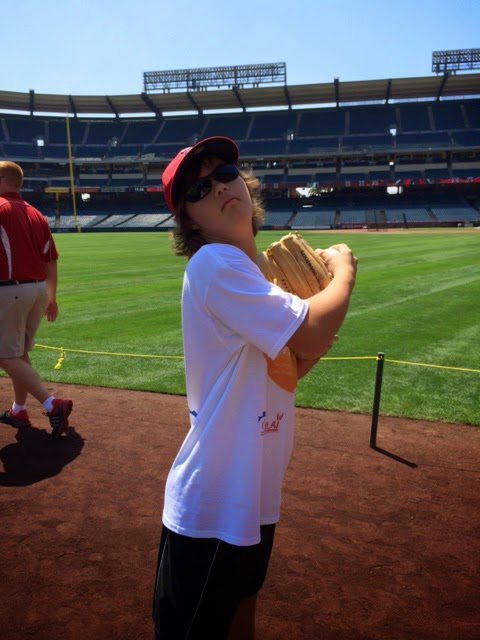 [Note the autographed ball in his right hand]
We finish the morning with a question and answer
session.  I learn that the Angels player who interacted so kindly with
Nick is relief pitcher, Mike Morin, #64.  I am an instant fan.  Morin
has a good rapport with the crowd as well.  A young girl shouts out that
her sister is 21 years old and wants to marry him.  He smiles and gives
the crowd a look as if he is considering it.
We get back to the parking lot and Nick switches
back into his RVCA shirt and hands me his glove.  “Do you want me to
hold the ball too?” I ask.  “No,” he says.  In addition,
the Angels have also given us tickets to tonight’s game against the Phillies
and Nick lets me know that he wants to go.  He holds onto his autographed
ball the whole drive home.
Today reminded me that Nick needs to adjust to and
become comfortable in situations with new people and new places before he can
enjoy himself.  He is shy and isn’t a “go with the flow” kind of kid and
that is okay.  Today, Nick needed extra time on the field and supportive
interaction from the adults around him.  Once he had that, the event
turned into what I am sure will be one of the most memorable days of his
summer.  It was a good lesson for him and for me.

I needed today’s success too. Not every event ends on such a positive note, but
many do.  I need to remember today so I have more patience and a broader
perspective next time he refuses to put on a T-shirt in a parking lot or stands
by while others participate in a seemingly fun activity.  I need to look
at situations more impartially and recognize, in the moment, when Nick needs
additional time and support, not at midnight as I reflect on our day! 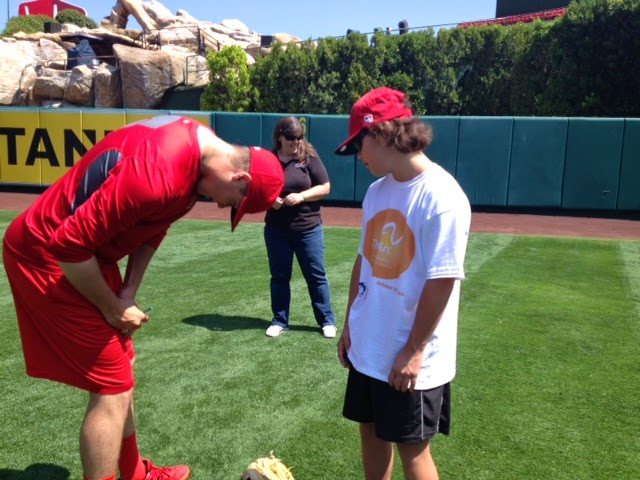 [Thank you dear friend on the field who snapped this picture of Nick!] 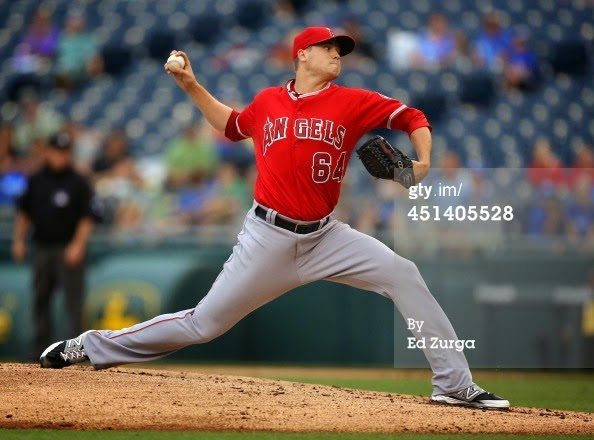 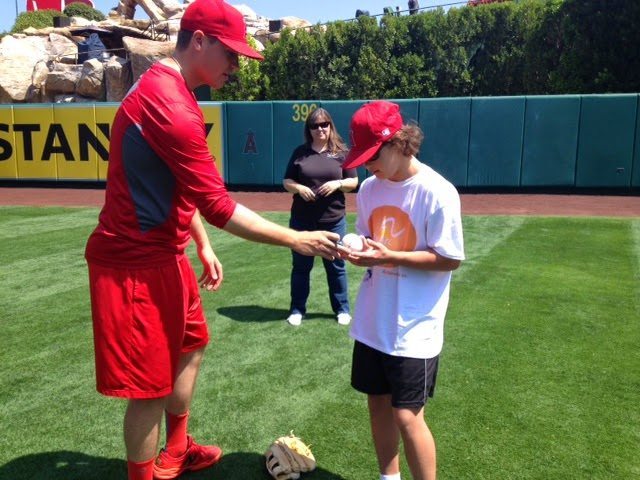 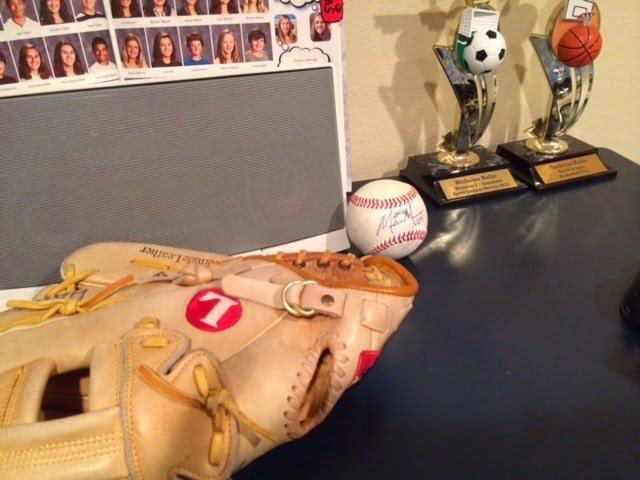 [The Ball – at home on his dresser]

And, of course, Nick got to go to the Angles game
with his dad, eat hot dogs and cheer on the team. The Angels won! 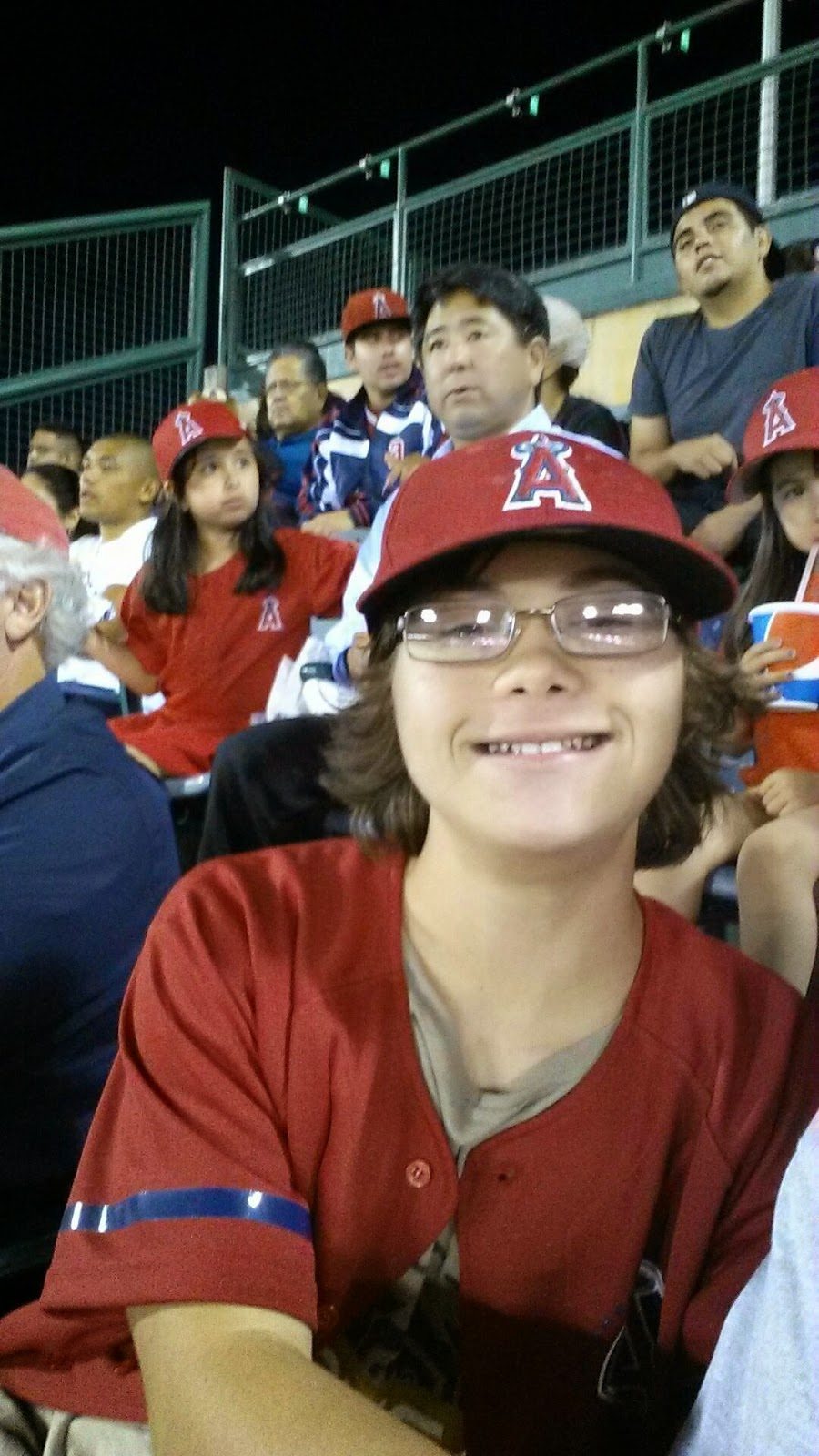 [And yes, that is his favorite shirt under his Angels jersey!]
Special thanks to the Professional
Baseball Athletic Trainers Society for hosting the event, the Arc for inviting
us, Kellie Perez/DSAOC for letting us know about the Arc’s invitation and, of
course, the Angels training staff and players (especially Mike Morin) for
giving their time and making it such a special and memorable day!
Posted in General, Thoughts On Down Syndrome
We use cookies to ensure that we give you the best experience on our website. If you continue to use this site we will assume that you are happy with it.AcceptPrivacy Policy