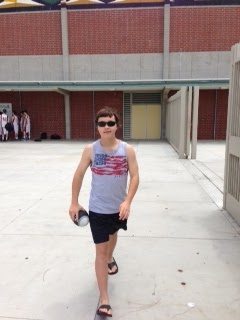 Those of you who know Nick know that he has a wonderful economy with words (and yes, I am borrowing the line from the movie Arthur).  It’s not that Nick doesn’t have a large and diverse vocabulary.  If he cares about a subject, he can talk about it and he cares about a lot of things.
Watching WWE (World Wrestling Entertainment)?  Nick can name each wrestler by his or her real name, not stage name, with signature and finisher moves.  Want to play Xbox’s Call of Duty: Modern Warfare 3?  Nick can run circles around my husband and me, while talking about using primary and secondary weapons, semtex, sniping and defending against juggernauts.  Listening to music?  Nick knows the lyrics to most songs by the Beatles, Queen, Eminem (yes, the rapper and yes, the bad words too), and George Thorogood and he sings, loudly.  He also remembers names.  Whether it’s the first and last names of classmates, the names of historical figures, the names of basketball or football players or the names of your pets, he remembers.  He also knows what  happened in almost every episode of The Simpsons.  The list goes on.  Yet Nick is often quiet.
Nick is quiet – in large groups, with new people, when he is tired, when he is angry and when he just doesn’t feel like using his words.  When asked “how was school today?”  Nick’s most frequent response is “good.” When asked “what would you like for lunch?”  The usual answer is either “beans and cheese” or a shoulder shrug.  On the first day of a recent two day trip with Nick, we had a conversation that went something like this:
Me: Nick, when people eat a meal together, a large part of what makes it fun is talking to each other.
Nick: Silence.
Me: We are going to be alone together for the next two days.  If we don’t talk to each other, it is going to be very quiet.
Nick:  Silence.
Me: Would you like to play Touch Hockey (on the iPad)?
Nick:  Yes.
You get the idea.  It isn’t that Nick can’t talk.  It’s just that he often chooses not to talk.
That is why this week’s dog walk was so darn pleasant and surprising.  It was dark out.  Nick’s dad, Bill, was working late and his sister was out with friends. The dogs, who had been cooped up in the house for most of the day, were restless.  “Let’s take the dogs for a walk around the block,” I suggested to the boys.  And out we went.  Patrick (Nick’s 16 year old brother) and I talked about the day.  Nick was quiet.  Patrick and I talked about how much Max, our 2 year old Doberman Pinscher, was pulling on his leash.  Nick was quiet.  Then Nick suggested (no kidding) that we play a “no talking” game.  This is a real game he and I play when we walk the dog alone. The idea of the game is to see who can keep quiet the longest.  The joke is that he thinks it is great fun to start talking as soon as I say “ready go!” The irony of the game is not lost on me. When I want him to talk, he doesn’t and when the goal is silence, he can’t wait to talk.
So we start to play the “no talking” game.  Each time I say “ready go,” Nick loses because he is the first one to speak.  We all laugh and Patrick and I exchange knowing smiles. Then, as we round the corner to Irvine Avenue, Nick says “I read the Outsiders book and saw the movie at school.”  I say “really?” He says “yes, Tom Cruise was in the movie.”  Now I barely remember the book, and I certainly don’t remember Tom Cruise playing a role in the movie adaptation, but I go along with it.  “Wow” I say, “what is the book about?”  Nick responds, “It is about the socs and the greasers.  The socs were rich and the greasers were poor and they get into fights.”  “Really?” I respond, looking at Patrick with widened eyes.  “Yes,” Nick continues, “and the girls in the book are named Sherri or Cherry and Sandy. And the boys are Ponyboy, Sodapop, Darrel, and Dallas.”  “You remember so many of the characters.  That is great.” I reply, “What happens at the end?“ I ask.  “Johnny dies in a fire and Dallas dies from the police.” Nick responds.  “I really like when you tell me about books you have read,” I say, as we round the corner towards home.
My thoughts after our dog walk?   I need to accept that casual conversations are not Nick’s current strength right now and spend more time talking to him about subjects he raises and enjoys.  I need to stop pressuring him to speak and replace my “use your words” mantra with more loving encouragement when he does share verbal information with me.  And, I need to give myself time to enjoy this over-the-moon happy feeling I have over the fact that Nick read, remembered and shared information from a book he read in school.
Posted in Thoughts On Down Syndrome
We use cookies to ensure that we give you the best experience on our website. If you continue to use this site we will assume that you are happy with it.AcceptPrivacy Policy