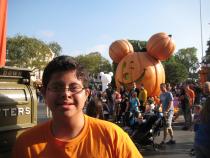 We asked Nick last week if we could write about him for the Visions gala. He said yes, and suggested we use his journal. The more we thought about his idea, the more we liked it. So, with his permission, we’ll tell you some things you wouldn’t know about Nick unless you were privileged, like us, to have access to his journal.

Nick loves his family “a lot” and cares about our feelings and our lives. He knows we are proud of him when he expresses himself, and when he plays or works hard. Nick recognizes that he and his brother, Patrick, don’t always get along but “still love each other so much.” Nick believes in God and knows people are human and make mistakes. Nick feels sorry for people who don’t have a pet. He wants to learn different languages using his computer, “like Italian, German, French and Swedish.” Nick is excited to grow up, get married, have one baby, and get a job. But he doesn’t want to get old and die, because he will miss us.

If you only talked to Nick at school or hung out with him at a party, you would learn none of this. Because of his limited speech, you might even think he has limited thoughts or dreams. You’d be wrong. But that’s a challenge people with Down Syndrome often face. Society forms opinions of them based on stereotypes, based on communication skills, and based on limited interaction. When we do that, when we presume to know about the preferences, dreams and goals of people like Nick, we make choices for them based on what we think they want and rob them of the opportunity and freedom to make their own choices. To honor and respect those with Down Syndrome, we need to learn to listen to them, follow them and offer support to them when appropriate.

We’ll leave you with two key entries from Nick’s journal: “I want to have fun, be brave and grow up to be an adult” and “I love my life and have a great future.” Nick knows what he wants from life and has his own goals. Now, it is up to us to support him in achieving them.

Thank you for joining us tonight. Your trust and support enables us to continue our work and help support people with Down Syndrome as they prepare for independence and life.