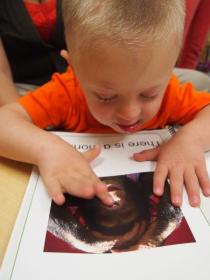 Dear Friends,
Our children were young when we hosted the first Visions gala in 2001.  Lauren was 6, Patrick was 5 and Nick was only 2.  They grew up with the gala in the background over the next thirteen years.  To them, it was a big party that unfolded from August to October.  As summer wound down, they would see preparations increase: donor letters in August, invitations in September and chaos in October.  Auction items flooding our living room helped transform the house from a peaceful dwelling into Gala Central.  It wasn’t uncommon on any given October night for the kids to find Mom and Aunt Jen tethered to computers, while colleagues worked furiously in the kitchen and garage.  They quickly learned to associate the gala with freedom.  Busy parents meant more movies, more Xbox, and later bedtimes.
As time passed, gala prep became easier and absorbed less family time.  Much of the work moved into the office and happened while kids were in school.  The Visions Committee members, now all good friends, each knew what to do.  The kids started to help, first with mailings, and then progressing to active support on event day.  They also knew what to do.  Because it was always there, the kids never found it uncommon that we hosted an annual gala like this.  They adjusted to its presence and relaxed into its periodic commotion.  The gala folded into the fabric of their lives, like other seasons, traditions and holidays.
And so it goes with Down Syndrome.  Our family has grown with Down Syndrome in the background.  Yes, Nick’s diagnosis originally commanded a lot of our attention.  As new parents, we coped with our emotions while figuring out what Down Syndrome was, what it meant to Nick and our family, and how we could best support him.  The issues we tackled sometimes transformed our lives into Down Syndrome Central.  It wasn’t uncommon to find therapists coming and going as we poured over resources and attacked the disability puzzle.  Our kids knew Nick had Down Syndrome … but it wasn’t a big deal.  At most, they would complain about unfairness when Nick got too much attention or perceived preferential treatment.
As time passed, life got easier.  We learned what we could and did our best.  Nick turns 15 tomorrow.  Because Down Syndrome has always been a part of his life, and our life with him, it does not feel like something uncommon.  We have adjusted to its presence and relaxed into its periodic commotion.  Down Syndrome folded into the fabric of our lives, and has enriched it.  We have learned new levels of patience and how to ask for help, give back and celebrate diversity.  Lauren immediately sought her volunteer “cause” after starting college; Patrick demonstrates an ease with children with disabilities almost startling for a seventeen year old; and our perspective on life adjusted in ways that seem so obvious now, but somehow escaped us before Nick.
We are on a fantastic journey, and we are grateful you joined us for a portion of it.  We promise to be careful stewards of the support you provide.  Thank you for being here tonight!
William and Dana Halle
Posted in Thoughts On Down Syndrome
We use cookies to ensure that we give you the best experience on our website. If you continue to use this site we will assume that you are happy with it.AcceptPrivacy Policy