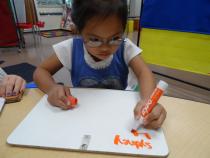 This year Down Syndrome Foundation celebrates its 10th year of service to our community. Its formation came about shortly after a road trip to Las Vegas. The birth of our son Nick, who was two at the time, had catapulted us into the disability world and a local community ill-equipped to support us. Our quest to learn all we could led to a clear recognition that the path could, and should, be better for other new parents. Our “plan” was to raise some money to do some good. In a classic example of “a little knowledge is a dangerous thing,” we decided that hosting a gala would be a simple way to kick start our organization. We spent much of the Vegas trip asking ourselves whether we could host a gala without losing money, and listing those we thought might attend if we tried. Some of you here tonight were on that initial list.

DSF’s ten-year history has in many ways mirrored our journey with Nick. When we saw a need for a parent support group, DSF formed one. After learning how to navigate the first few years of Nick’s life, DSF created a Parent Education Program for new families. And when we turned to Nick’s education, DSF developed The Learning Program. Learn a little, pass it on, learn a little more, pass it on.

Ten years later and … here we are. What lies ahead for the next ten years?
We’re not quite sure. New needs seem to present themselves at each curve of the road, and we rarely can analyze the next problem before we experience it through Nick. But this we do know: we no longer travel alone. Our trip to Vegas, if made today, would look very different. There would certainly be more traffic, as an entire community of parents, educators and researchers locally and around the world work to improve education and life for children with Down syndrome. We are honored to be part of such a growing and powerful movement.

Whether this is your first year or your tenth year participating in the Visions gala, we thank you. This event forms the cornerstone of support for everything DSF accomplishes. We truly could not do it without you.