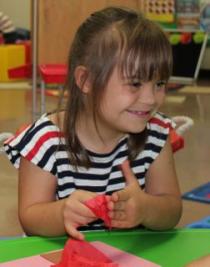 The past twenty months we have been watching a race which will have profound impacts on all of us. As the disability community and the medical community speed toward their own, competing goals, we ask ourselves, “Who will win, and at what cost?”

The Disability Community
Never has the future looked brighter for people with Down syndrome. A fractured community has started to coalesce into an energized movement with a growing voice. Businesses increasingly see the very real benefits of employing people with disabilities; advocates work to cement hard won rights; advances in early intervention show educators that people with Down syndrome are determined and capable learners. People with Down syndrome are doing things not thought possible a generation ago, and a productive fulfilling life has become the norm rather than the exception. Down syndrome no longer means “can’t” … it means “opportunity.” But, ironically, as these doors open recent medical technology has fueled a “search and destroy” mentality which continues to gain traction.

The Medical Community
In the last two years, biotechnology has spawned no less than four techniques to screen for Down syndrome during the first trimester of pregnancy. Medicine has developed amazing abilities to treat a variety of conditions in utero, but it can do nothing about Down syndrome.

Well, almost nothing: a reported ninety percent of women who receive a Down syndrome diagnosis choose abortion. Last year the American College of Obstetricians and Gynecologists recommended that all pregnant women be screened for Down syndrome early in pregnancy, yet ACOG rebuffs requests from the National Down Syndrome Society to discuss ways to educate patients about Down syndrome before making a choice. Already Down syndrome groups across the country see a significant decline in births of children with Down syndrome.

The Checkered Flag
Two communities, both racing. One group rushing to help those with Down syndrome find their rightful place in society; the other pursuing early diagnosis with eugenics implications. We recognize that some will misperceive our concerns as an attack on abortion. It is not. We also understand that many would label us hysterical alarmists using overly dramatic rhetoric. We don’t think so.

We could engage for hours about how the world would be poorer without people with Down syndrome, and why screening for Down syndrome without giving parents unbiased information is the first step in eliminating a segment of our population. But we cannot here do justice to the very important discussion the current race demands. We would like, however, to leave you with a question to ponder: Who are we to decide what lives are worthy of living?

Thank you for joining us this evening for our celebration of people with Down syndrome.