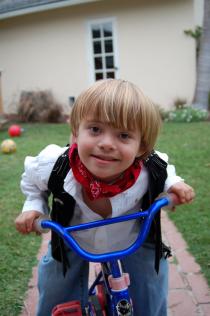 Raising a child with Down syndrome is remarkably like raising any other child. When Nick first arrived we had to feed him, change diapers and do all those infant things. Now that he’s older, he plays and fights with his siblings, watches his favorite television shows and has a GameCube obsession. Nick does homework, goes to soccer practice and whines when he doesn’t get what he wants. He likes to stay up past bedtime, takes pride in his accomplishments and values his family’s love. Just like all children.Nick’s Down syndrome does complicate our home life with what a columnist once described as extra texture. But, within the confines of our home, Nick doesn’t “have Down syndrome.” He is just Nick, the youngest of our three children who has all the complexities of a human being. Most of the time, we forget about his extra twenty-first chromosome. Until we walk out the front door.

We do not believe the outside world deliberately creates an issue of Nick’s diagnosis. But it happens anyway. Nick lives under society’s microscope, with a sharpened focus on his perceived flaws instead of his accomplishments. At school, on the soccer field, in the grocery store people dissect his behavior. What will that boy with Down syndrome do? Why is he doing this, or why isn’t he doing that?

It is easy to recognize even the subtle attitudinal barriers that confront Nick as he ventures from the home out into the community. But how do we address the problem? How do we encourage our neighbors to get to know the person behind the label? We must somehow infuse the outside world with the accepting attitude that dominates Nick’s life inside our home. Is the answer more Down syndrome awareness? Is it more effective education? Is it simply encouraging those in our community to get to know our children as we do – as people – through events like this evening?

We do not have all the answers. But we do know that obstacles clear when people make the effort to really engage those that face unique challenges. The disability seems to disappear from view, the strained pronunciation fades, the uncomfortable feeling dissipates when one makes the effort to meet the person.

We commend all of you for helping our community overcome its ignorance, its fears and its misconceptions about those that appear different. To paraphrase civil rights activist Johnetta Cole, perhaps one day we will all embrace difference, respect difference and allow difference to the point that difference does not make a difference.

Thank you very much for your support.
William and Dana Halle